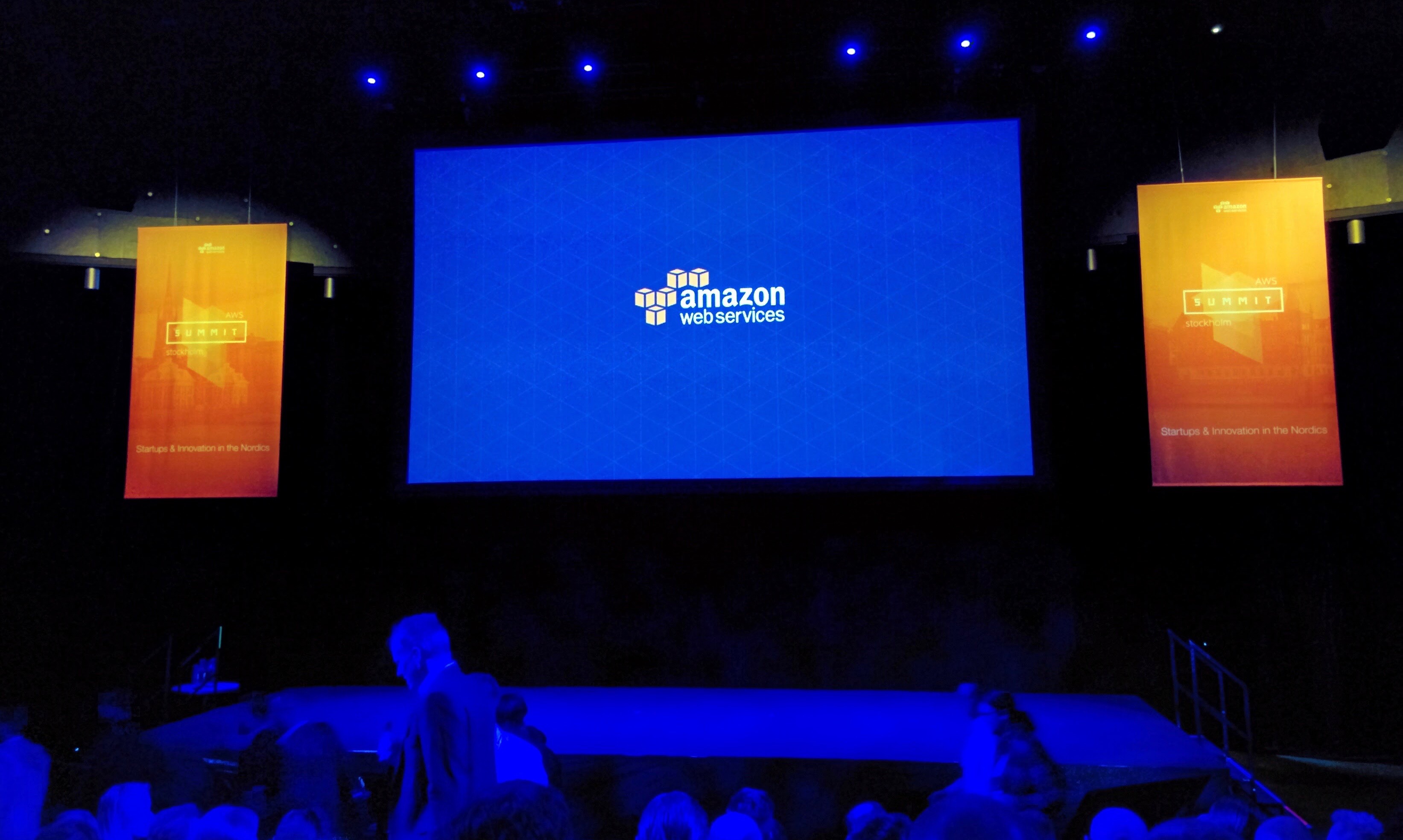 Today I attended the AWS Summit Stockholm 2016. I wanted to attend last year but I was not fast enough and couldn’t get a spot. So this year I was thrilled!

I’ll try to summarize the event in terms of my personal experience, since if I would describe every talk, I would better redirect you to AWS case studies page

To begin with, at the entrance of the conference building, there was a woman DJ-ing. If you mix that with the fact that it was 14º and sunny in Stockholm, you start the day in a really good mood.

After the registration and some good coffee and sandwiches, I went to check out the stands. There I found companies I knew like Splunk, GitHub or SuSE (yes, they still exist!), but also unknown ones for me, which was nice! More of that on the stands section.

The first talk in the schedule was from the Head of AWS Nordics & Baltics Darren Mowry. Before they called him on stage, a video of a woman DJ-in was projected, together with loud music and inspirational sentences… that was… strange

Darren was talking about how the Nordics is one of the best places in the world for innovation and technology, being the 4th largest startup market in the world.

After giving some more numbers, Ian Massingha, Chief Evangelist at AWS Europe came to stage. He gave a 1h talk about all the services that AWS provide, and quite in detail to be honest. That may seem like overwhelming, but if you have interest in the topic and you’re new to AWS as I am, then you can learn a lot from the talk.

Ian interviewed several people during the talk to expose how those people used AWS for their companies. One of these people was Johannes Löfgren, head of DevOps at iZettle, a Swedish startup. He explained how AWS made their lives much more easier, since it is PCI-DSS compliant, which is a requirement if you work with credit card information. Couldn’t avoid thinking about the problem we have in academia, with human genetic data not being able to be stored in cloud environment because of security/privacy and lack of regulation.

Last remark on the talk would be some tips and patterns for innovation from Ian. Those could be summarized as:

After a nice lunch and some more stands, I went to the first talk in the startup track, which was a bit disappointing. I was expecting an overview on the startup scene in the Nordics, and what we got was a flood of numbers about investments done in the Nordics for the past few years, and how the world is starting to know these countries as the new Silicon Valley.

I would have liked more a list of startups and success stories, but it was good anyway, and sort of made me feel proud, even though I’m Spanish

After that one I went to listen to the startup talks, which was more like what I wanted to listen to.

Mojang explained how they use AWS clusters to build users’ Minecraft Realms. It was a really interesting talk, and would love to have some of their slides to go over them in this post.

QuizUp’s talk was super interesting as well. It was more DevOps focused. They were describing how all, absolutely all their infrastructure is defined as code. They use a Microservices architecture as well and that makes it very easy to update simple services. A word of advice that I through was good to consider was:

Be careful with deployment when all your infrastructure is defined as code. If you make too many changes to the code, you’ll spend a lot of time deploying. This will slow down the whole system.

They do have policies for deployment other than “on every code change”.

Last talk I attended was the Deep Dive on Microservices and Amazon ECS, given by Johan Broman - Architect at AWS, and Jude D’Souza - Architect at Wrapp.

Johan was talking about what a microservices architecture is and how it differs from the traditional monolithic architecture. This architecture has several advantages over traditional ones, like better maintainability, possibility of scaling only the demanded services, easier and faster deployment, etc. However, it still has some disadvantages; service discovery is a problem, i.e knowing which service is running where, using which port, etc. And services communication and spawning as well.

Jude came in a this point to explain the microservices architecture at Wrapp and how they’ve been moving ahead. Jude described how they managed the aforementioned problems themselves with custom solutions, and how ECS has solved most of them (not all yet, service discovery is still a problem).

Very interesting talk, this one!

An important part of the conference was the companies stands/expos. As I said before, there were some companies I’ve never heard about before in there, which was nice. A brief summary of the stands I stopped by:

Beside getting some awesome swag, I was talking with the guy at the stand. He was telling me how they use AWS not only for their internal architecture, but also to host companies’ GitHub Enterprise instances in case that the company doesn’t have or want to have GitHub in a local cluster. Pretty neat.

It was nice to talk with then, since I didn’t have a clear idea of what Splunk is. If you’ve read my ELK post, then Splunk is pretty much like that, but hosted. Which is actually nice, since one of the things why we ended up not using ELK at SciLifeLab, was because of its maintenance work.

Basically Splunk takes all the data from your logs and events and curates it for you so that you can query it. Haven’t tried it, but it is supposed to work with the majority of logging formats. Is that even a finite set? I wonder

Yet another metrics platform, that one would be more like Nagios. If you’ve ever worked as, or close to system administration/DevOps, you’d now about Nagios. Datadog is similar, but it monitors not only server status but also services status. Pretty nice life demo.

Still not very clear what they were doing there, to be honest. I stopped by because I used to work with SuSE back in Barcelona, and got a bit nostalgic. I didn’t know that they’re still out there, and even less doing business, good! They were explaining how they host some SuSE Enterprise instances in AWS and how they prepare AMIs for public use.

I enjoyed the conference and learned quite a lot. Its a real pity that we in academia can’t use this kind of services yet for human data. I’d like to know what’s the state of the art in this matter in different countries, and how regulation is working there. Lots of problems like storage, scalability, job scheduling, etc. could be palliated using platforms like AWS.

P.S: Bonus from the conference: 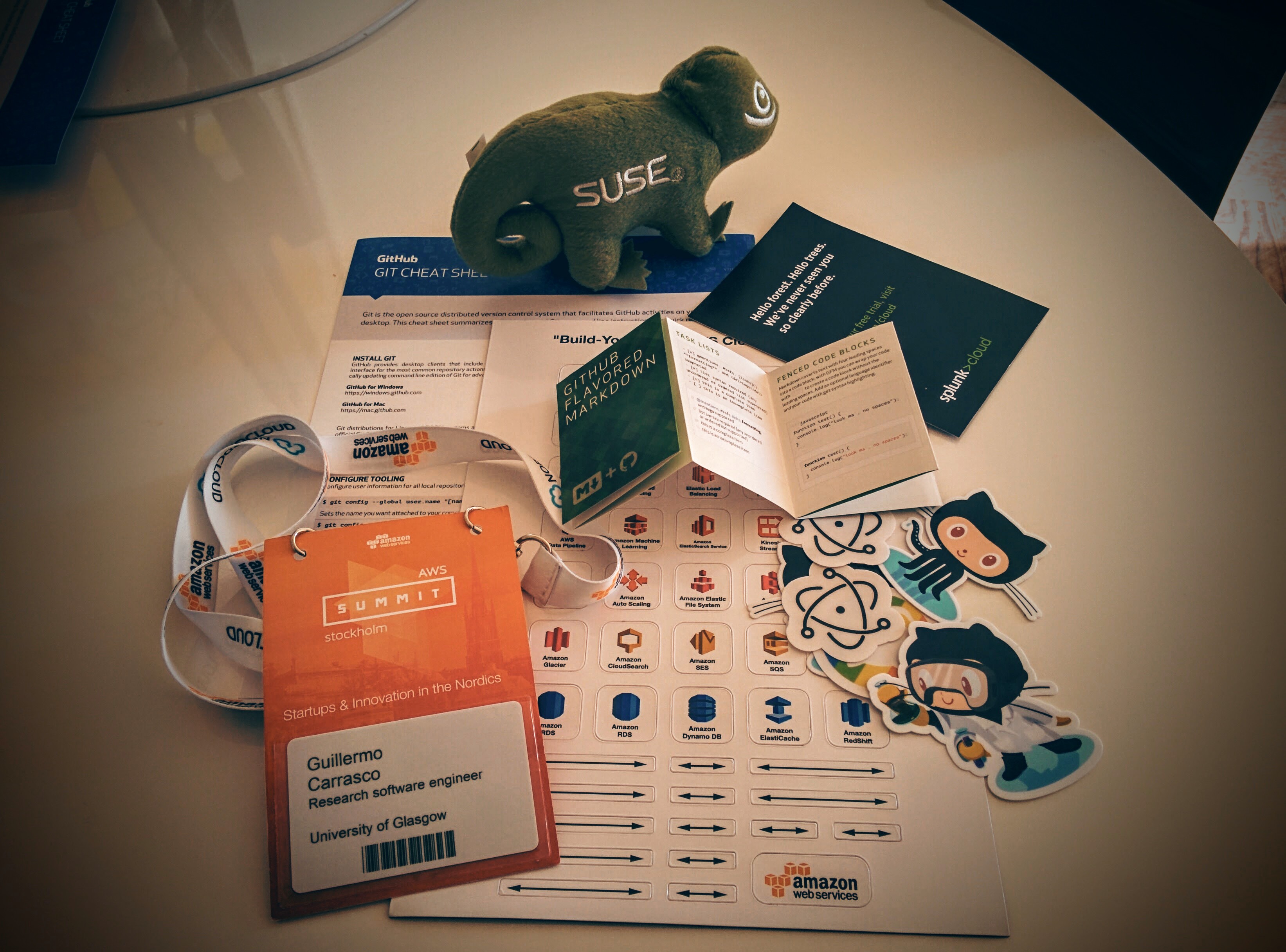